Difference between revisions of "CityLiga"

CityLiga (CL) is one of the oldest mixed classes leagues. The idea of CityLiga was developed and realized by Detlef 'Dee' Zimmer on June 10, 2004. Since its foundation the motto has been the following: "On track you shall be rivals, but still friends" - CityLiga-founder Detlef 'Dee' Zimmer. Two seasons are held every year, one in winter/spring and one during summer/autumn respectively. In these seasons the car-track combination varies and is chosen to find the best all-round driver in Live for Speed. There have been 25 CityLiga seasons held so far and the final CL season, CL24 is yet to be realized. The season numbering started with the third season - the first two seasons had the year in their names.

There is a Grid Qualifying (GQ) that takes place at the start of the season. The GQ is used to distribute all participants of the season onto the various competition servers (= grids). Every driver, who has signed up for the season, will have a certain amount of attempts to set their fastest lap times. The fastest laps are recorded by the tracker.

A CityLiga season usually consists of 9 or 10 rounds. At the start of each round there is a short qualifying using one of the qualification types. After the quali, there may be one or two races with various rules (for example mandatory pitstops), according to the schedule.

When LFS developers published the first versions of Live for Speed during 2003, there was a growing need of organised leagues and a set of rules for these events. The idea of CityLiga was developed and realized on June 10, 2004. It all started with the combo of XRG on South City Sprint 1. A bunch of racers fought for the title in the following four months. With the growing interest and the success of the first season, a second season was organized soon after. Early in 2005 a rumor of a new LFS version was found everywhere and the decision was to wait for it to come out. Soon after version "S2 Alpha 0.5P" proved to be stable, the counters were reset and the CityLiga project started using multiple grids due to the increased interest. It was clear that in the upcoming seasons, the league would grow more and more.

Later, the whole team of Total Power Sliders joined and helped the organization, also the team website was changed in order to meet the needs of the growing CL. During the preparation meeting for the fifth season, 90 racers showed up on the TeamSpeak server. The competition servers weren't made to cope with such a huge amount of racers, so promotions and relegations between the grids were introduced. Over 100 participants signed up for CL VI, therefore there were four grids (each with ~23 racers) and a waiting list has been introduced. Due to the amount of people joining, some drivers like BurnoutCrew's mich4 and Woody passed their entry and substituted their steering wheel for a race admin seat. 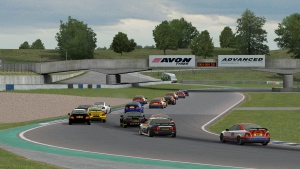 The 7th season started promising with four grids, but turned out to be a breaking point. With the pull-out of 'Mister CityLiga' Dee the organisation not only lost its founder, but also a driving force. Moreover, the threat of an end of Total Power Sliders made many drivers leave the league. Along with a growing LFS fatigue, this endangered the future of the CL. Despite switching from TPS to Zone30, Heinz 'BigH' Thelen took over the lead and brought the season to a worthy end with the help of the last TPS member standing Trexirus and other active drivers.

However, BigH signalized early that he was not willing to continue in this role, so the future still dangled on a string. Fortunately, the helping part of the regular starters wanted to continue and the group of mainly Heroes of Racing and Zero Bar Project drivers joined forces with Matthias 'Æthelstan' Fieseler to fill the shoes and keep CityLiga with all its principles alive. The duties were arranged quickly, a new homepage was online and an interesting schedule was integrated. Neatly solicited, a well filled grid of well-known and rookie drivers started into the 8th CL season in the fall of 2008 and at its end applauded for a brilliant premiere. The footsteps to follow weren't small and with the lack of experience in terms of league organization, this was well earned.

The spirit of the CityLiga has been reignited, so Schuhti and Jogy joined the staff. In season 9 the 100 drivers margin was hardly missed and due to many withdrawals, the finale, for the first time in a while, was held over just one server and everyone was a first grid driver.

Untouched by this and with refined structures as well as a certain routine, the preparations for the jubilee started. After the end of Paule TV with Nana's and Paule, Xcite-TV took over the service to produce a German livestream coverage. Fireball and Hansi with the help of the well-known co-commentator Webflat accepted the challenge and continued a high standard coverage. An appetizer was made by !ce.Micha to catch the interest of drivers for CityLiga 10. Not even the deplorable retirement of HoR Screeper from his organizing duties lessened the excitement. Thanks to minimal fluctuations, even the 'small' number of 83 sign-ins resulted in two well-filled grids at any time. After the (real) cup was given to the winner (first time in CL history), one happily celebrated the turn of the year.

The CityLiga website has gone under design updates for the 11th season. While the color was changed as usual, HoR HEIZER became the new designer, taking over this role from ZBP HeinZ. Moreover, the website grew to its limits, which required the move to a new webspace. Sadly Joker and Ragrez from HoR as ZBP Jandecided to pull-out of the organization team. Thanks to the help of avetere, who made this possible, the homepage was reshaped! Finally, the number of participants was triple-digit again, although just half of them could call themselves CityLiga-drivers at the final round. Still two well-filled servers did start regularly.

CL 12 couldn't keep up - in terms of sign-ups. Sadly, it ended again in a one-grid finale, although through the season two servers were used to fight for positions, points and fame. The cause for it shall not be searched in the less-glowing color of the season, but more in the interest in Live for Speed itself ebbing away. However, there seemed to be a hard core of unflinching competitors and the hope for the new or the rookies respectively dies last. New records were set, though more on the sporting side of the CL, so that an active driver may be named at this point for once: ﾒcite Maddin is the first one to defend his title in a back-to-back seasons. Moreover, he's the first one to win his third title, which brings him this place in this (hopefully) never-ending story.

Superstitious people might have had the fear that a CityLiga 13 in the seventh year would have the seven-year itch, but the staff and the drivers competing proved the opposite: it was a fair and exciting season, without negative stories to tell! Spooky alongside HoR and MatzeXX were the race admins for the season, which was presented with a blue website. Although the number of participants decreased in comparison to the other spring seasons, it was still higher than generally expected. The one or the other newcomer and some very 'old-stagers' had their hands in it.

For CL 14 the homepage was set back to its traditional red. The fortnight rhythm was continued after the majority of the participants wished it. However, the consequence was that just seven races could be organised before the traditional winter break. So far this remains the shortest season in the CL-era - the season still met all demands of the CityLiga. Until the final race a handful of drivers were in reach of the driver's championship. And not just the international companions of long-term CL drivers looked into the championship, also some unconnected internationals, mainly from eastern Europe did. A reason might be the introduction of 'open configurations'. With these new drivers, the number of participants leveled with CL13, which meant an increase in comparison to the previous fall seasons. The season finale was streamed in English for the first time.

The colour of hope, green was the color of choice in CityLiga 15. The trend of using open configs was continued, but the biggest innovation was the (carefully executed) internationalization with a first-time presence in the official LFS Forum. The latter turned out to be important. Although the one or the other linguistic barrier might still be in place, this action produced results immediately. Without the new drivers, appealed by this, breaking the post-TPS participation record wouldn't have been possible. However, the number of drivers completing the season didn't increase proportionally, so room for improvements is left. Fortunately, former CL participants and some known names of LFS came back/returned to CityLiga.

Turning green to blue, in CL 16 for the first time, a big name from the international scene came close to winning the title. With 128 sign-ups the record from the previous season was broken again, with 99 setting times in Grid Qualification, but only eight finished every race of the season. One suffered from the loss of 14 withdrawing drivers and 45 disqualified ones.

The logo didn't change, only the color and the number did. After the year in smurf blue, the Simpsons' yellow was used. To quote the popular TV series: "D'oh!" Following two record seasons CityLiga 17 again surpassed the century mark. While the first race was the most crowded one ever, the final one saw just 36 finishers. Still no need for the above expression? Well, at the end of May, the homepage turned white! After vain tries to re-host the website, it turned out to be lost forever. Since CL has had a section in the official LFS Forums, structures and procedures were adapted and the final two rounds were organized bilingually in the English forums. Maybe another reason for the evolution of the participation numbers. Not impressed at all by this was champion ﾒcite Cali, who repeated the the back-to-back defense and increased his number of championship wins to three, just like his teammate Maddin did.

The big task for CL 18 was to create a new website from scratch. It took much time and lots of motivation within the staff, therefore the fall season couldn't be realized and CL regulars used the time to be active in other leagues or take a break from the game. In January 2014 a teaser appeared on cityliga.de. The BurnoutCrew featured it in a report on their website, asking if this was a desperate try to pitch the CL up, or if it was a true sign of a living league. It turned out it was: in a copper brown the new CityLiga 18-homepage was up and running again.