Difference between revisions of "Game pads" 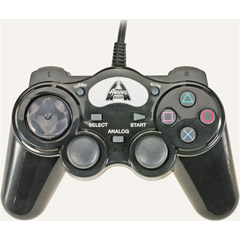 Note - this guide was written by a user of a PlayStation design controller (2 analog sticks, one directional pad, 4 face buttons and 4 shoulder buttons). The names used for the button in that position on the PlayStation will be used, controller button numbers will vary.

Why axes are important

Let me warn you straight off the bat - Live for Speed wasn't designed for pads. As with all bona fide racing simulations, LFS was designed for a wheel and pedals set. With a wheel and pedals set, you can give the car half throttle - the pedals aren't buttons, they are linear axes. A button isn't a linear axis - you are either stomping on the pedal or have your foot off.

This isn't great as it is difficult to control high powered cars like the Formula V8 off the line - more often than not with a button throttle you will wind up facing the wrong way or - even worse - taking someone else out. Conversely, when braking, you will be more likely to flatspot your tyres. There is no throttle and brake smoothing in LFS, and the throttle and brake help is little use.

Fortunately, unless you have modified a VERY old PlayStation 1 controller, you should have analog sticks.

How to set up a game pad

Firstly, calibrate the axes of the thumbsticks. If it isn't off, turn calibration lock off. Then click on the C next to that axis. Whilst holding it down, move it to its full extents, put it in its central position (let go) and stop holding down that C. Do this for all of the axes. Importantly, turn calibration lock back on! The last thing that you want is to have steering stuck to one side and a stuck throttle at T1 in a public server ...

After calibrating your axes, assign them. Move the axis on the pad up and down to ensure that that is the right axis. Set the left analog stick left and right (usually X, this may vary) to steering. Then select "combined" for Throttle/brake axes. This way, the throttle and brake will be on one axis. In the middle of the axis, no pedals will be depressed. At one end is full throttle, the other end is full braking. You might want to invert this axis, so that pulling back on the stick will accelerate and pushing forward will deploy the brakes. This can feel easier when coming out of corners.

This bit isn't rocket science. Click on a command, and click on the button to assign to it. For my money, the things you must have assigned are

* Gear up and gear down are imperative to have, even if you use auto gears. Auto gears is not competitive anyway. The clutch is needed needed to be able to clutch-dump start. Also, should one want to clutch-kick (a drifting technique), that is possible. However, auto-clutch is perfectly sensible, as most people use sequential gears anyhow - real sequential gearboxes do not need a manually operated clutch for gear changes.

Wheel turn should be set to between 90 and 180 degrees, you experiment and use what you feel comfortable with. Wheel turn compensation should be set as high as possible. Set force strength very low or even off, should you like that. Throttle/brake centre reduction should be set moderately high, in the region of around 0.45.

If you have an Xbox 360 Gamepad in XP

If you have an Xbox 360 Gamepad in Windows Vista