Endurance Pros (EnduPros) is an Endurance league run by Team Rock Racing and cholover7. Its first round started on February 22nd, 2020.

The idea behind the 2020 Endurance Pros by cholover7 was very simple: slowly revive endurance racing for Live for Speed and with it make a send-off to every track environment before the big update comes. With a 11-car first event, filled with action and overtakes, the 2nd edition around Aston was an absolute slammer of succes with 28 cars making the grid and over 65 drivers taking part. The Endurance Pros will turn into a proper series after the 3rd edition around Westhill.

The default format is still being searched for: currently experimenting from the 1st till now the 3rd event, to be prepared for a proper format once the series launches. The idea is, together with New Dimension Racing (NDR.) sanctioning, to host 2 qualifying days, and of course the race day. On Sunday and Friday, before the main event there are two 60 min-long qualifyings, with 30 min per class. The race is held on Saturday. 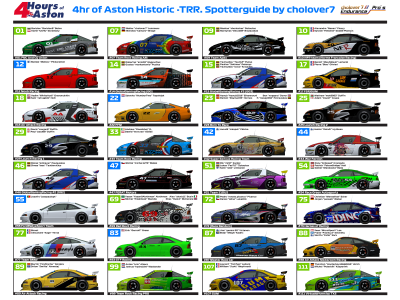 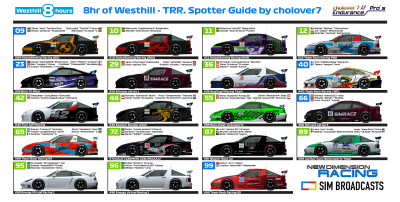 The event was broadcast live by [TC] Pete on Twitch.

The event was broadcast live by [TC] Pete on Twitch.

The event was broadcast live by Sim Broadcasts on Twitch.