Difference between revisions of "Autocross Editor" 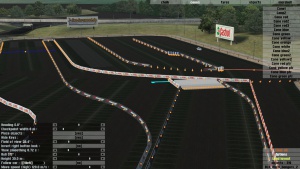 An autocross track at the Blackwood car park

Note : Live for Speed must be unlocked to use the autocross editor.

The autocross editor is accessed by pressing SHIFT+U inside the game. In there you can save, load and edit layouts, when you turn on the "place objects".
Note: Press SPACE, if the Autocross Editor-menu is hidden.

All the editor keys are listed on that screen. The autocross system works over the internet as well. The host can edit / load a layout while guests are connected.

To make an autocross layout, you place objects and checkpoints and a start point. If you don't place a start point, then it will use the default start grid and will behave like a normal race track. In that case there will be no time penalties but you will need to place checkpoints so that laps are timed.

Select an object type and place an object by pressing O. you can adjust the direction (heading) of the object by using the < and > keys. If you press M with any object selected, it will move that object to the mouse position, and update it with the heading that you have set.

A maximum of 512 physical objects can be placed + 96 Marshal/Route checker circles. Objects range from Red and White solid barriers and advertisment banners to moveable straw bales, cones and keep left/right signs, as well as many other items.

Some objects are track-specific, such as the Ramps for the Blackwood environment only, and the Metal railings for South City only. 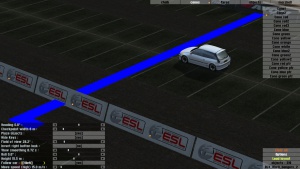 The XFG driving though a checkpoint

You need one finish line and at least one checkpoint. In effect this defines the circuit, and also gives you split times at those points. Pressing F or 1, 2, 3 gives you a finish line or a checkpoint. You can adjust their direction and width in the same way as you do for objects, by pressing the M key. Checkpoints are invisible when driving - it is up to the person who edits the track to make sure the user drives through them, by using cones or other objects. The W and E keys can be used to set the width of a checkpoint.

NOTE : direction is important with checkpoints. You must drive over a checkpoint in the correct direction or no time will be recorded.

In "marshall" mode you can place Marshall areas and Route checkers.

Marshall areas are shown by a red circle. If a car enters one of them in single player, it will receive a 45 second penalty. 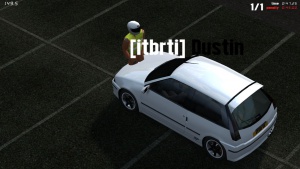 In multiplayer mode, the player will be forced to spectate.[1]


Press V to toggle between high and low view.
Viewing the track - press SPACE to turn on or off all the editor buttons so you can see the track clearly.

Field of View: Use these for buttons (above letters, not numpad) to change the field of view