The Rony's Tuesday's Fun Race (RTFR) is a single event series run by Rony and Race Green Events. Its inaugural season was held in 2011. RTFR is a semi-weekly event and is held on Tuesdays. It's a free and ready-to-race type league and its main goal is to organize a fun race for everyone who just wants to have fun and race, without the need of signing up and committing to a whole scheduled season.

The upcoming car/track combo is picked by Rony and is usually announced on Sunday (the weekend before the event) in the RTFR forum thread. The combo is chosen so that one event uses non-slick tyre or road cars and the other one slick tyre cars, so the events are varied and all are unique.

The event is held in the evenings. There is a qualification before the race: the qualification lasts an hour and racers can join any time during the hour-long quali to set their times (only those are allowed to participate in the race, who have set a valid time during the quali). Between the quali and the race there's usually a 10-minute break. Races are 30-minutes long. Although this is a fun race, the document of Rules of Clean Racing should be followed.

There are no starting numbers or any special in-game name requirements. 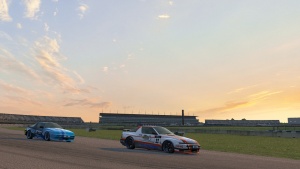