Difference between revisions of "Wheels"

It's a common question that many a sim-racer has asked - which wheel should I get? Buying a wheel is the easiest way to upgrade the immersiveness of LFS, and should help you to be able to understand what the car is doing better, whether your racing or drifting. But which ones are good, and which ones warrant your hard-earned cash?

You can get “cheap” generic racing wheels, however these really aren’t worth touching with a barge pole, you can pick up a great new wheel for £50, you can spend more, and you can spend less by buying one of eBay (but beware, there are limits on how much abuse a wheel can take), and you could pick up an ok wheel (great just to see if a wheel is worth it, or if your a casual LFS'er) up for £5 (~$10) excluding postage - they are big pieces of kit and to get them posted well with lots of protection can cost a fair bit (ie to send a Microsoft Sidewinder wheel across the UK will cost around £10 (~$20).

Most modern wheels nowadays come with a set of pedals, these are usually 2 pedals (throttle and brake), some also have clutch pedals as well, however this is less common and usually found on the more expensive wheels, ie in the £70+ (~$140) range

Some have FFB (Force Feedback), which relays bumps in the road through the wheel as a vibration, or the wheels turning (as you would often feel up the steering column), ie as the tyres slide the wheel in a real cars turn as the wheels follow the path of least resistance - FFB makes sure the same thing happens to your wheel, and gives invaluable feedback, you can feel as the car’s tyres start to let go. It sounds like a gimmick, but it is very useful! Not to be confused with Vibration, which just shakes when you hit something like an arcadey console effect - FFB is fully (and very well) supported in LFS, while vibration (aka "Rumble Effect") isn't because it would give very little extra immersion (ie after hitting a tree in real life your wheel doesn't shake!).

Rotation is the last part where wheels differ, it is measured from lock to lock. Some wheels have 900° (that's 2 and a half turns), some have 240° (that three quarters of a turn) and some have 180°, 900° is the most natural (although standard road cars use 720° or less), but you can race with 240° quite happily, and many WR holders use 180° so they needn't take their hand off the wheel, and so that they can quickly dial in the correct amount of steering, however you can be easily competitive with 540° or 720°. The LFS road cars have 720° of lock, you can use more or less, and is adjustable in the Logitech Profiler (assuming its a Logitech wheel, and out of those you can only change the rotation on the DFP and G25, however you can go from 90°-900°). 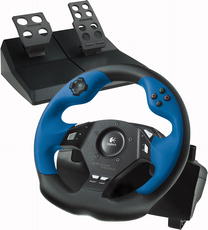 This wheel has vibration (for PS2) and force feedback (on the PC, once the wingman drivers are installed). It has 180° of rotation lock to lock. I think it’s out of production, and as such seems to command £35 (~$70) new, which seems very high (compared to Logitech's other offerings), and is really only worth getting around the £20 (~$40) mark. This wheel is compatible with some older PlayStation 2 games before the Driving Force Pro became available.
Manufacturer site 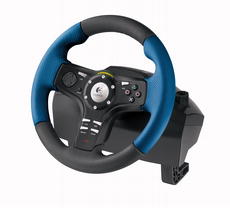 Designed for PlayStation 2, will probably work with PC once you install the Wingman Drivers, however its really a wheel you might already have for a PS2 rather than one I recommend you buy for LFS - if this is in your price range the Microsoft SideWinder wheel is probably a better bet.
Manufacturer site 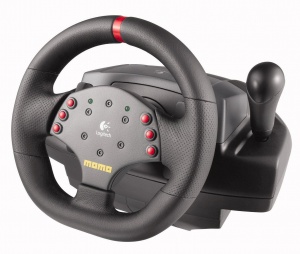 A very good wheel, 240° of rotation, 2 pedals and force feedback. Make sure you get a Rev. B version, as Rev. A has pedal problems (which however can be fixed given 30 mins and some tape, but its still easier and safer to get the newer Rev. B). It currently sells for £50 new, although many people have upgraded to the G25, so there are some more on eBay, I think Logitech have stopped producing them so expect prices of them new to rise (as theirs few new ones on the market), but used prices to fall. This (and the DFP) are the best wheels for around £50 (~$100), however the general consensus is that the DFP is an all round better wheel
Manufacturer site

Essentially similar to the Logitech MOMO Racing, the only real difference is that it is seemingly made from better materials. It is rare, and therefore quite expensive on sites like eBay (they are so rare I can't estimate a price, but i'd geuss over £70 (~$140)), it came out before the Momo racing and is now out of production - while better than the Momo Racing, a DFP is cheaper and only slightly less good, while the G25 is a little more and much better. 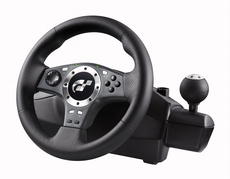 This wheel has 900° of rotation. Like the Momo the Rev. A seems to have pedal problems, Rev B’s don’t have these issues. Available new around £55 (~$110), while used should be cheaper. This and the Momo are the best wheels for under £140 (~$280). This wheel has two Pedals. Many used ones are on eBay after people have upgraded to the G25. If i were to buy a wheel and had £55 (~$110) or thereabouts this would be top of my list to buy. The only issue is that at 900° the motors will not physically let you turn the wheel quick enough to countersteer for things like drifting, however it will do it great at 240°, so in this respect it still beats the Momo.

This wheel was not marketed as being compatible with the PC - it was sold as a wheel for the PlayStation 2, especially Gran Turismo 4, however, it works with PC, it just needs Logitech Profiler installed, it uses a standard USB connector and the GT4 branding was just a marketing ploy to bundle GT4 and this wheel. It will work in JUST as many games as the Momo or other wheels will, don't let the PS2 compatibility fool you!
Manufacturer site

900° of rotation. Better FFB than the Momo and turns more than twice as fast as the DFP (a bugbear of the DFP - this wheel can turn so fast that if your fingers where to get in the way of the paddles when it turns full throttle it WILL hurt). This wheel has 3 pedals and comes with a proper car gear stick (aka an H-Gate shifter), ideal for road car fans. Put simply this is the best wheel for under £1,000 (~$2,000). Retails at around £150 (~$300). The wheel is bigger and to quote one user "I love mine, its FFB feels sublime, the pedals feel beautifully balanced, and the wheel is bigger - i love it, it's amazing, I wish I'd bought it sooner". This wheel really is the top-dog for your "average" sim racer with a sensible budget, and it
Manufacturer site 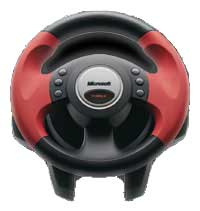 Old and discontinued, but a good wheel, expect to pick one up from eBay for £5-£10 (~$10-$20) excluding postage (which, due to the size and weight of a wheel could easily be as much, if not more, than the wheel itself!). This wheel has 240° of rotation and FFB. A great first wheel if you are a casual LFS'er, want a cheap wheel, if you are unsure of whether a wheel is for you or if you can get one of these quick and want to know if its worth waiting to get a DFP/G25 etc.

It was made in USB or parallel gameport flavours, gameport ones tend cheaper, but useless if you have no gameport, although you could pick up a sound card (which should come with a gameport) for £2 (~$4) (including postage) on eBay - if you plan on doing this method i reccomend that you go for the Creative SoundBlaster Live! 5.1 as it features a gameport, is XP compatible, cheap (~£2 (~$4)) and has fairly decent sound quality. If you have the choice, pick the USB one as if you do come to sell it you should get a higher price for it.

If you cannot for one reason or another (due to a disability or lack of space) cannot use pedals, the Thrustmaster Ferrari Force Feedback wheel had split paddles, the bottom half of each pedal being analogue when the pedals were not plugged in. Thomas Enterprises produce steering wheels with similar features.

It is not uncommon for mass-produced devices with moving parts to harbour a few gremlins and Logitech controllers are no exception.

There are a few issues which many Logitech users have in common and some may be addressed by applying software patches or using new drivers and software written for just this purpose.

While some problems may be hardware or design issues (therefore can't be fixed by software), others may be rectified by trying the software fixes available. If your controller shows signs of a shifting centre for example, you can try the official Logitech fix for that problem. Before you post your Logitech problems on the Live For Speed Forums please check out the Wingman Team Web Site first to see if others have had the same problems you are having. Try the new drivers and other fixes that relate to your controller and see if you can solve some of the common problems that other people also have with their controller. Other utilities can be found on the Wingman Team site including DX Tweak2 which works for other controllers too, not just Logitech ones.

Please visit the site and try to fix your problems. This may save several similar topics being created here every time someone experiences a typical fault. Many people have reported that their controller issues were solved by patching their software or updating to newer versions. If all else fails then contact Logitech for a replacement controller (if your warranty has not yet expired). 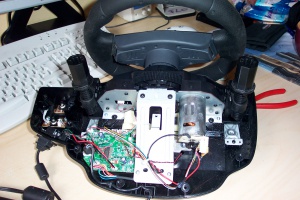 The inside of a DFP. Most wheel problems can be fixed without opening it.

There are a few issues that can be identified that may lead to an under-performing controller. If your controller is still covered by the manufacturer's warranty it is wise to enquire about a replacement. Pulling your controller to pieces, or even removing one screw, will void your warranty so consider whether or not repairs are worth doing before becoming Dr Frankenstein. If you have no choices left then try this link. Although the site features a Momo, the information can be easily applied to the DFP as well. Replacement *pots, springs etc are not available separately. Special lubricant (grease) is used inside the controllers and you should be able to buy some from an electronics or hobby store. Normal lubricants are unsuitable and may corrode the plastic itself.

Don't forget to check our hardware section for more discussion on wheels and other controllers.

Pot: Nickname for potentiometer. This is a small device used in analogue wheel/pedal or joystick that measures the movement of the wheel or pedal and sends signals to the PC so that your action can be reflected in the software.

Correctly Setting Up A Logitech Wheel 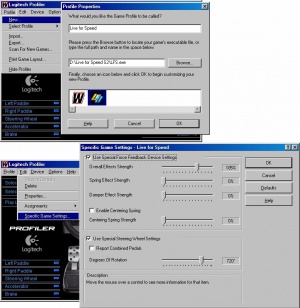 Example screenshot of a properly set up G25.

Make sure that in game controllers the following settings are set up:

These settings should work on all Logitech Wheels, and of course the FFB settings only apply to those wheels with FFB.