Fragmaster's GTi Thursday ([FM] GTi Thursday) is a weekly single event series and an XFG + XRG league run by [SR] SonicrealmsRacing, Fragmaster, Teho GP and B2R Born 2 Race. Its first race and season started on September 7th, 2017. [FM] GTi Thursday is a weekly event and is held on Thursday evenings. Although it's a seasonal league with its own standings, it's a free and ready-to-race type league: no need of signing up and committing to a whole scheduled season. Joining the "GTi - Race Day" voice channel of the FM Discord server is required to participate (as drivers get called out on Discord during qualifying - listening is sufficient, talking not required).

Any driver is welcome to join and compete with others - XFG and XRG are good starting cars for newcomers.

The event is held in the evenings of every Thursday. The server is password protected before the qualifiying starts, so come early enough to join us. You can also ask the password on the Discord server.

For each event, one of XF GTI (XFG) and XR GT (XRG) cars, or both are used. The upcoming car/track combo is picked by the winner of the previous race. After the pick, the combo is set on server and is available for practice for a week (until the next race on Thursday). Different configurations of same track can only be picked 2 times in a row (for example: BL1 -> BL2 -> AS2). The same track can’t be picked 3 or more times in a row.

BC (button clutch) is disabled and forbidden.

There is a one-shot qualification before the race: players get called out on track in "GTi - Race Day" voice channel of the FM Discord server. The connection list (N) dictates the qualifying driver order. A called out driver is allowed to run the outlap and a single timed hotlap. After crossing the start/finish line and submitting a time, the driver must spectate (Shift+S). Only called out players are allowed on-track. The qualification ends and track opens when the last driver completes their timed lap and the organizer says so. Only those are allowed to participate in the race, who have set a valid time during the qualification and are in the Top 40 (as 40 is the max grid spot number). There's usually a 5-minute break between quali and the race.

Races are usually 1 hour long. A single mandatory pitstop is required (no work needed). Like in every race, the document of Rules of Clean Racing should be followed.

There are no starting numbers, no skin requirements or any special in-game name requirements.

GTi Thursday is a racing league started by [SR] Adebayor and now ran by B2R Storm. First race was held on September 7th, 2017. The league quickly gained popularity and now it's one of the biggest in Live for Speed. 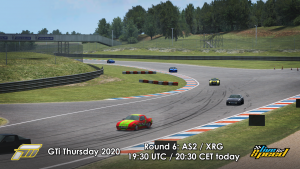 Promotional poster for Round 6 of Season 4 of FM GTi Thursday, by Mandula